The Fermi Paradox is a choice-driven narrative strategy game in which you’ll guide alien civilizations that can thrive or simply survive through the ages, picking up radio signals from distant stars and finally making contact with one another by exploring the furthest corners of the galaxy.

Guide the fate of different planets, species and civilizations. Balance technological progress, military aggression and resource waste so that alien societies survive long enough to make contact with other species.

Alien societies grow and develop on their own – but you can alter the path of their development during crucial moments of social upheaval. How will society change when animals are domesticated, world wars break out or if civilizations begin cloning their own people?

Develop societies from the Stone Age to technological singularity and beyond. How will they treat their own, and what will their beliefs be? What message will their first radio waves sent out into the cosmos contain? What are their intentions when travelling thousands of years by interstellar spaceships to another star?

Each play-through will become a unique interstellar saga. From the first decision of which lifeforms will evolve into sapient species, there will be numerous choices determining the history and values of that civilization – from their views on sexuality and religion to their treatment of weaker members of society.

Overcome the long distances of space

Multiple generations will live out their days on starships seeking other habitable planets, while radio signals may echo unnoticed for millennia before they reach anyone that might listen. Of course, the society that sent out a signal may have already perished, and the starship answering their call might arrive only to find alien ruins. Elsewhere, distant colonies may develop into civilizations light-years ahead of the inhabitants of their home planet.

Each technological age brings its own challenges, from nuclear war to climate catastrophe, to murderous artificial intelligence. Experience the fragility of the universe, the dangers of military power and how peace might be wrought amongst countless intersecting cultures across the galaxy.

Who are Anomaly Games?

We are a team of indie game developers in Berlin, based at the Saftladen Game Collective. We work to make thought-provoking, inspiring and progressive games, and hope to offer a new take on the space sim genre. The Fermi Paradox is our first game together, but we’ve already made our fair share of video games. Our contributors have worked on titles such as Spec Ops: The Line, Kane & Lynch 2, The Captain is Dead, Dreadnought, Sea of Solitude, Vampire: The Masquerade - Bloodlines, Dishonored 2, Void Bastards, Assassin's Creed : Origins and Lost at Sea

Why Early Access? We believe that feedback from the player community is essential for making great games. The universe of “The Fermi Paradox” is vast and we have many features, species, planets and narrative events to add. A strategy simulation game has a lot of replay value and our game would benefit a lot from the valuable feedback of players about what they enjoy in the game and what things they would love to see in the final version. Also, our game systems are very modular, that means we can add new features and story events to the game without reworking everything else.

Approximately how long will this game be in Early Access? We're planning to leave Early Access in around a year. But if we see that the game needs more love afterwards we will stay in Early Access until we are happy with the result.

How is the full version planned to differ from the Early Access version?

The full version has around 30 different species to choose from and we aim to have 5-10 hours full of unique gameplay per playthrough. There will be multiple endings to reach, new technological ages, unlockable planets with new species and a far bigger variety of narrative events than in the early access version.

What is the current state of the Early Access version?

The version of “The Fermi Paradox” that will be releasing in Early Access is still absolutely a full, and fulfilling, video game experience. Throughout Early Access, leading up to the full release, we will simply be expanding and improving on that experience to make it even more fun and engrossing to play.

We have been developing this version of the game since 2016 and so have a stable and polished core version of the game ready, that is fun to play and can keep you occupied for hours. We don't have any placeholder graphics or dummy texts in the game, but some artwork and story events may change during the Early Access phase. There are already 12 different alien species to evolve, We wrote around 300 different narrative events and you can explore 10 technological ages with your civilizations. Multiple playthroughs will play differently but some text can repeat themselves a bit. In the Early Access version the meta game where you can unlock new planets and characters is not implemented yet. The overall quality of the game is good but there is the possibility of encountering a bug, typo, or a smaller balancing issue.

Will the game be priced differently during and after Early Access? As the Early Access version does not include the full intended content, we will sell it for a lower price than the final game.

How are you planning on involving the Community in your development process?

We highly appreciate your feedback to help improve our game and make it more accessible. This is not a beta version that relies on the community to find critical bugs. “The Fermi Paradox” is a game in which your choices can bring about many different outcomes, and we are curious to see which paths you’ll take. We also love to hear ideas about narrative events and what kinds of stories inspire you so that we can make more of them.

In order to download this early access game you must purchase it at or above the minimum price of $18 USD. You will get access to the following files: 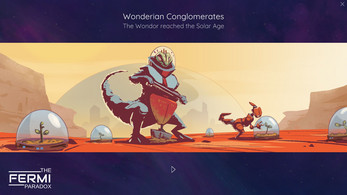 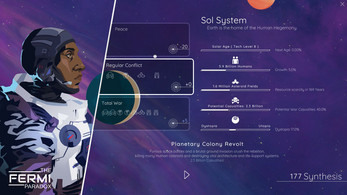 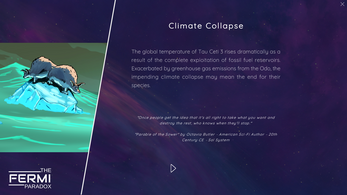 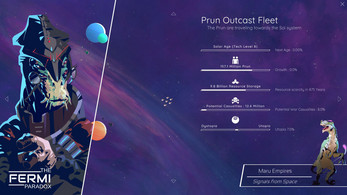 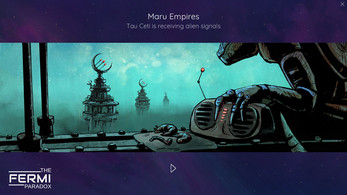